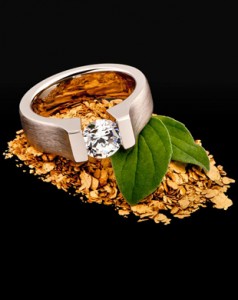 Wedding rings are made to be expensive because they are considered to be one of the important items you can keep after the wedding. And while some might use vintage rings from their parents and grandparents, it is always the usual option for couples to have their wedding bands made totally from scratch. Can you imagine the process involved in making these rings? It can surely affect the environment in some ways… But one company from Toronto thought of making these jewelries from reclaimed gold. FTJco or Fair Trade Jewelry Company which is founded by Robin Gambhir and Ryan Taylor is now making the engagement and wedding rings from recycled gold and jewelry. Their product is considered to be green and here are the 5 reasons why:

1. Since their product is made from reclaimed gold, this means that there is less mining process involved in the manufacturing of the jewelry. Mining has always been blamed as one of the leading causes of deforestation and the possible deterioration of the soil due to heavy chemical extraction. So less mining equals less forest affected which in turn is beneficial to nature and to us human as well. Recycled gold can also be collected from scrap processors from used computers, laptops, and other gadgets. On the other hand reclaimed platinum is acquired by obtaining from a catalytic converter in used cars which is a more feasible option than mining.

2. FTJco also gets their gold and platinum from other sources like the Oro Verde in Columbia. Oro Verde’s (which translates as ‘green gold’) miners work delicately through the lush rainforest in their country and extract the gold with the use of ancient artisan methods. This means that they work primarily by hand and used no machines in the mining process. They also negate the usage of cyanide and mercury in extracting gold which is a process used by a lot of commercial mining companies today.

3. FTJco choice of sourcing their gold from Oro Verde works in both ways since the miners are paid with the minimum price of gold in the market and not dictated by the price fluctuation which is usually followed by other companies. This practice ensures a reasonable pay for the miners with tangible incentives and their safety is well taken care of as well.

4. FTJco get their diamonds only from qualified sources: the Canadian Diamonds which are mined according the strictest environmental standards; the diamond market; and clients who wish to re-use their old diamond stones. None of these products were derived from the illegal activities of rebels in Sierra Leone (as seen in the movie “Blood Diamond”).

5. FTJco engagement and wedding rings bear a certification from credited ecological associations such as the Alliance for Responsible Mining and the Fair Trade International. This certification is a guarantee that all their products are made from the ancient mining techniques by the Oro Verde miners as well as a strong supporter in the preservation of the Choco rainforest which is located in the country of Columbia.