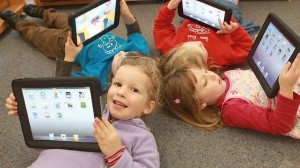 Does your kid spend too much time on the computer and keeping himself with Facebook or Twitter for most of the time? Or is he playing with his XBox too much of the time that he forgets to work on his assignments and house chores? If you have a kid like this then you need to know what is the normal and ideal way of letting them use technology and also know when is the right time to step in.

Being a mother today of kids and teenagers is quite unfortunate in some ways. Gone are the days where you can stare at their faces at any time of the day because most of the kids of this generation are either glued into the television or the computer monitor. You may appreciate the convenience technology can bring into your household. In fact, some of us tolerate these things thinking that their kids will become a ‘techie’ or more familiar with the use of gadgets and technology. But is it really worth it to allow these kids to have more screen time than the usual? How will this affect their overall development?

Most of us have heard about this recommendation from the American Academy of Pediatrics that kids are only allowed to have 1-2 hours of quality electronic entertainment per day. And this recommendation should be followed on all kids over the age of 2. A study was conducted by the American Journal of Epidemiology in 2010 reported that most of the teens and adolescents spend about 25 to 30 hours of television and computers. They are usually hooked in these electronics for entertainment, gaming, and social media purposes. And what’s amazing about this study is half of the parents being surveyed said that they usually set a time limit for their kids to enjoy their screen time but 18% of their kids disagree with them.

Lisa Guernsey who is the author of the book entitled “Into the Minds of Babes” said that measuring the screen time of kids today is getting more and more complicated. It’s not like before when parents can easily turn of the TV if they want to because most of these kids have accessed to computers and smart phones. And what’s alarming about this is that these kids can freely access these devices at any time of the day regardless of where they may be. Gadgets of today are becoming mobile and the convenience of a mobile device is often abused by kids who are becoming more and more exposed to the use of modern technology. They may be able to learn something from the technological advances we are getting in these modern times, but frankly they are usually tuned in to FB, YouTube, Twitter, and other social media sites where not all of the content is child friendly. They can be easily exposed to contents which are inappropriate from their age and it can likely “poison” their minds in the process.

If you are going to sum up the total screen time of all the technological devices that our kids are using, you will arrive at a very staggering number. Based on the computation, the average American kid in between the ages of 8 and 18 spends more than 7 hours a day looking at different screens from different gadgets. This study was conducted by the Kaiser Family Foundation and according to them they have done a similar study five years before and the never could have imagine that the average screen time of kids could not rise any higher. Donald E. Roberts, Ph.D. who is a co-author of the study and a Stanford University professor in communications said that the number keeps on increasing and it’s going on an alarming rate.

Scientists have now discovered that too much screen time can often lead to a serious behavioral effect on the child. They have done a research on the effects of having too much electronic engagement and according to the data too much screen time for kids are linked to an increasing incident in risky behaviors. Aside from that, teens who are actively involved in social media like Facebook and Twitter are exposed to such social media activities and these are more likely to correspond to some of the common mood problems found in teens. Being updated with the use of technology and all the technological trends is good. Using Facebook and Twitter is great because it gives your kid a chance to keep in touch with his peers even if they are half way around the world. There is no problem in these things. The problem only comes if your kid spends too much time into these platforms that their minds are becoming totally glued into it. So glued that they are led to believe that it’s the only ‘reality’ they have to know in life and nothing else really matters.

In the end, it all boils down to the proper time management in the screen time of your child. There’s nothing wrong with letting them watch a few of their favorite shows every once in a while or giving them enough time to use the PC. In fact, using the computer will enable your kid to develop cognitive and social skills. It’s how you supervise your child will greatly matter in their overall development. So talk to you child, teen, or even your tween kids and teach them how to become responsible individuals. Teach them that it’s okay to use their gadget and electronic devices so as long as they now how to limit themselves. Make them understand that too much of something is bad and this is also true when it comes to being overexposed in their screen time. Be positive in dealing with this issue and train them how to become good citizens and ‘netizens’ alike. In this way, you can be assured that the development of your kid will be on track and he will also be properly informed with the use of technology at the same time.